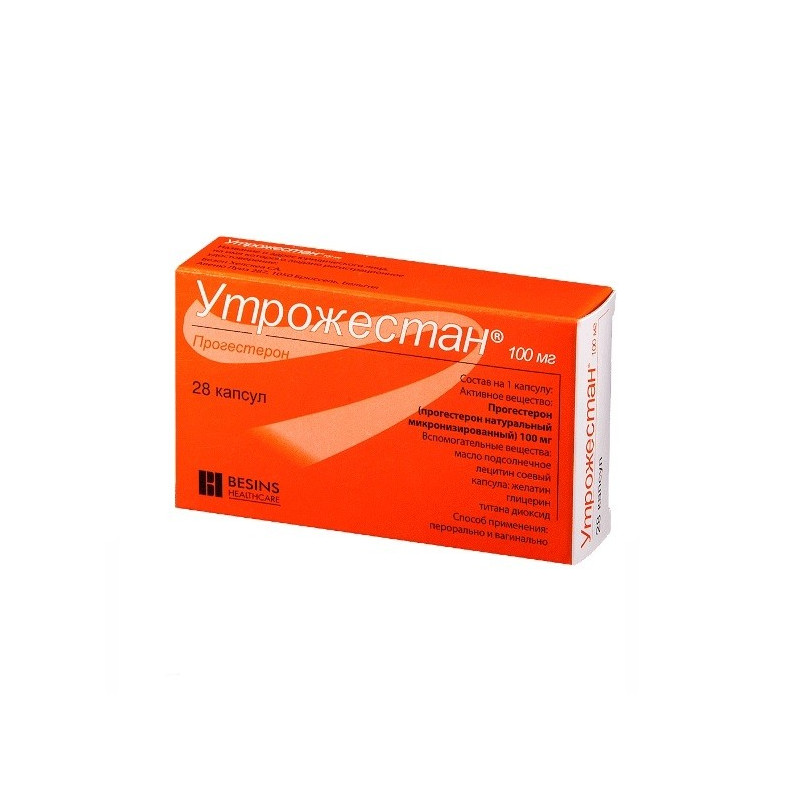 Utrozhestan - gestagenny drug. Progesterone, the active ingredient of the drug Utrozestan, is a hormone of the corpus luteum. By binding to receptors on the surface of target organ cells, it penetrates the nucleus, where by activating DNA, it stimulates RNA synthesis. It promotes the transition of the uterine mucosa from the proliferative phase caused by follicular hormone to the secretory phase. After fertilization promotes the transition to the state necessary for the development of a fertilized egg. Reduces the excitability and contractility of the muscles of the uterus and fallopian tubes, stimulates the development of the terminal elements of the mammary gland. Stimulating protein lipase increases fat reserves, increases glucose utilization. Increasing the concentration of basal and stimulated insulin, contributes to the accumulation of glycogen in the liver, increases the production of gonadotropic hormones of the pituitary gland; reduces azotemia, increases the excretion of nitrogen in the urine. It activates the growth of the secretory section of the mammary glands acini, induces lactation. Promotes the formation of normal endometrium.

- Infertility due to luteal insufficiency.
- Premenstrual tension syndrome.
- Violations of the menstrual-ovarian cycle due to impaired ovulation or anovulation.
- Fibrocystic mastopathy.
- Premenopause.
- Replacement hormone therapy for menopause (in combination with estrogen drugs).

Utrozhestan is indicated for use in the first and second trimesters of pregnancy. With caution used in the III trimester of pregnancy (due to the risk of liver dysfunction) and during lactation.

The duration of therapy is determined individually, depending on the clinical situation.
Oral route of administration: the drug should be taken orally with water. In most cases, with progesterone deficiency, the daily dose of Utrogestan is 200-300 mg, divided into 2 doses (in the morning and evening). In case of insufficiency of the luteal phase (premenstrual tension syndrome, menstrual disorders, fibrocystic mastopathy, dysmenorrhea, premenopause), the daily dose of the drug is 200 or 400 mg, divided into 2 doses (in the morning and evening) for 10-12 days (usually 17 -26 day cycle). When hormone replacement therapy in premenopause with estrogen intake, Utrogestan is applied at 200 mg / day for 10-12 days.
Intravaginal route of administration: in the complete absence of progesterone in women with nonfunctioning (absent) ovaries (egg donation), the drug is administered intravaginally with estrogen therapy 200 mg / day on the 13th and 14th days of the cycle, then 100 mg 2 times / day with 15 second to the 25th day of the cycle, from the 26th day and in the case of pregnancy determination, the dose increases by 100 mg / day every week, reaching a maximum (800 mg / day) divided into 3 administrations. This dose is usually applied for 60 days. To maintain the luteal phase during the in vitro fertilization cycle, it is recommended to inject intravaginally from 400 to 800 mg / day, starting from the day of injection of chorionic gonadotropin during the entire period of pregnancy. To maintain the luteal phase in a spontaneous or induced menstrual-ovarian cycle, with infertility,associated with dysfunction of the corpus luteum, it is recommended to introduce intravaginally 200-300 mg / day, starting from the 17th day of the cycle for 10 days, in case of delayed menstruation and diagnosis of pregnancy, treatment should be continued. With the threat of termination of pregnancy or in order to prevent habitual abortions occurring against the background of progesterone deficiency, 200-400 mg are administered intravaginally daily in 2 doses (in the morning and in the evening) in the I and II trimesters of pregnancy. The capsules are inserted deep into the vagina.

Utrogestan should not be used for contraception.
Influence on ability to drive motor transport and control mechanisms: when taking the drug inside, care should be taken when engaging in potentially hazardous activities that require increased attention and speed of psychomotor reactions.

Side effects most often indicate an overdose and disappear spontaneously with a decrease in the dose of the drug.

The drug should be stored at a temperature not higher than 25 ° C.