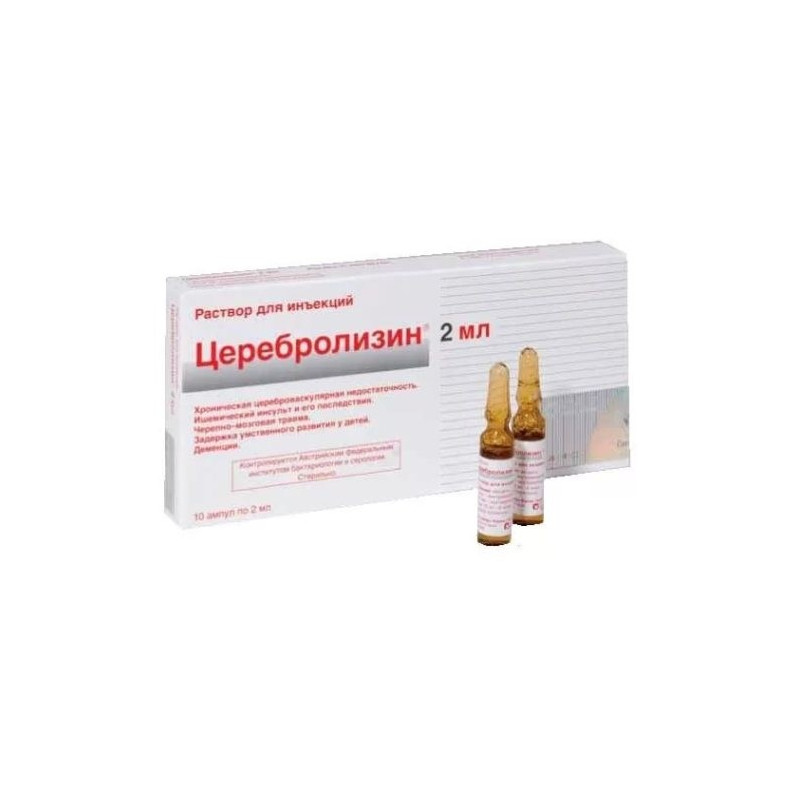 Metabolic regulation: Cerebrolysin increases the efficiency of the aerobic energy metabolism of the brain, improves intracellular protein synthesis in the developing and aging brain.

Functional neuromodulation: Cerebrolysin has a positive effect on cognitive impairment and memory processes.

The complex composition of the drug Cerebrolysin, the active fraction of which consists of a balanced and stable mixture of biologically active oligopeptides with a total polyfunctional effect, does not allow for the usual pharmacokinetic analysis of individual components.

Reaction to the introduction: with an excessively rapid introduction in rare cases, you may feel the heat, sweating, dizziness; in isolated cases, palpitations or arrhythmias. Therefore, the drug should be administered slowly.

On the part of the gastrointestinal tract: rarely - loss of appetite, dyspepsia, diarrhea, constipation, nausea and vomiting.

On the part of the central nervous system and peripheral nervous system: in rare cases, the alleged effect of activation was accompanied by excitation (manifested aggressive behavior, confusion, insomnia). There are reports of occurrence in isolated cases (

On the part of the immune system: extremely rare - hypersensitivity reactions or allergic reactions, manifested by headache, pain in the neck, limbs, lower back, shortness of breath, chills and collaptoid state.

Local reactions: rarely - redness of the skin, itching and burning at the injection site.

It should be noted that some undesirable effects (agitation, arterial hypertension, hypotension, lethargy, tremor, depression, apathy, dizziness, headache, shortness of breath, diarrhea, nausea) were detected during clinical trials and occurred equally in patients treated with Cerebrolysin, and in patients of the placebo group.

Taking into account the pharmacological profile of the drug Cerebrolysin, special attention should be paid to the possible additive effects of co-administration with antidepressants, including MAO inhibitors. In such cases, it is recommended to reduce the dose of antidepressant.

Do not mix in one solution for infusion Cerebrolysin and balanced solutions of amino acids.

Doses and duration of treatment depend on the nature and severity of the disease, as well as on the age of the patient. You can assign single doses, the value of which can reach 50 ml, but more preferably a course of treatment. The recommended optimal course of treatment is daily injections for 10–20 days.

The residual period of cerebral stroke and traumatic injury of the brain and spinal cord is from 5 to 50 ml.

Psychoorganic syndrome and depression - from 5 to 30 ml.

Alzheimer's disease, dementia of vascular and combined Alzheimer's-vascular genesis - from 5 to 30 ml.

To improve the effectiveness of treatment, repeated courses may be conducted, until the patient's condition is improved due to treatment. After the first course, the frequency of dose can be reduced to 2 or 3 times a week.

Doses from 10 to 50 ml are recommended to be administered only through slow intravenous infusions after dilution with the proposed standard solutions for infusions. The duration of infusion is from 15 to 60 minutes.

Compatibility of the drug was tested and confirmed (for 24 hours at room temperature and the presence of light) with the following standard solutions for infusions:

The drug should be stored in a dark place at a temperature no higher than 25 ° C.