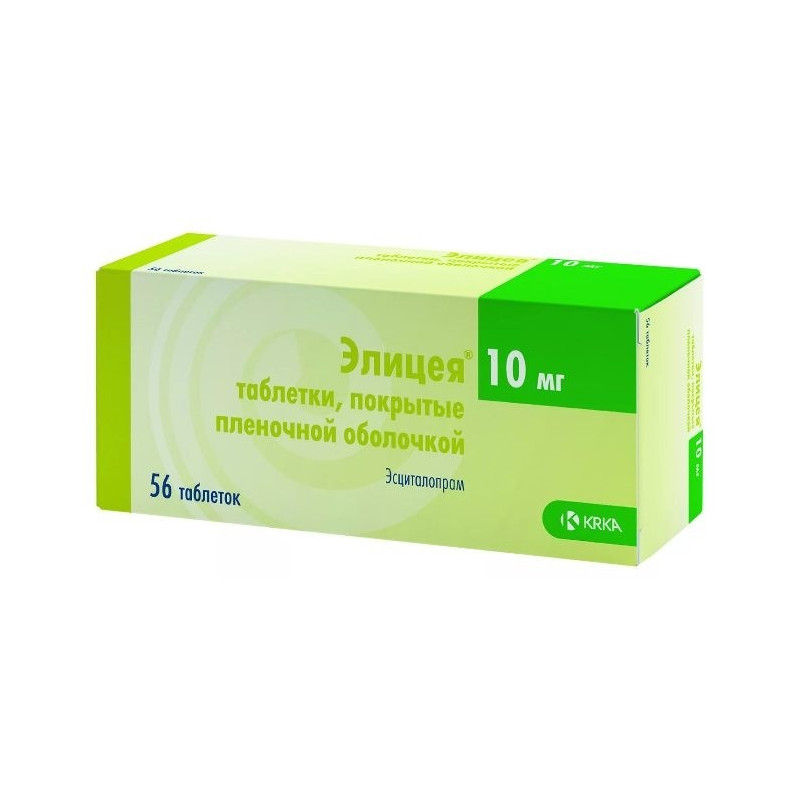 Depression, panic disorders (including with agoraphobia).

The drug should be taken orally, 1 time per day, regardless of the meal.

The recommended dose is 10 mg per day.

Depending on the patient's individual response, the dose may be increased to a maximum of 20 mg per day.

The antidepressant effect develops 2-4 weeks after the start of treatment. After the disappearance of the symptoms of depression, it is necessary to continue therapy for at least 6 months. to consolidate the effect.

To stop therapy with escitalopram, it is necessary to gradually reduce the dose within 1-2 weeks in order to reduce the risk of developing the syndrome of "cancellation".

Panic disorders (including with agoraphobia)

The maximum daily dose is 20 mg.

The maximum therapeutic effect is achieved approximately 3 months after the start of treatment.

With a mild or moderate degree of renal failure (creatinine clearance (QC) of more than 30 ml / min), dose adjustment is not required;

In severe renal failure (CC less than 30 ml / min) - the drug should be prescribed with caution.

In case of abnormal liver function, the initial dose is 5 mg per day for 2 weeks.Depending on the individual response of the patient, the dose may be increased to 10 mg per day;

Reduced activity of the isoenzyme CYP2C19

The recommended initial dose for the first 2 weeks is 5 mg per day, depending on the patient's individual response, the dose may be increased to 10 mg per day.

Precautions and special instructions for use

You should stop using the drug Elycea® in the case of the development of convulsive disorders, epileptic seizures, or their increase in pharmacologically uncontrolled epilepsy.

With the development of the manic state of the drug Elycea® must be canceled.

Estsitalopram may increase the concentration of glucose in the blood in diabetes mellitus, which may require correction of oral hypoglycemic doses and / or insulin.

Hyponatremia associated with a decrease in the secretion of adrenocorticotropic hormone (ADH), against the background of the use of the drug Elycea® rarely occurs (often in older people, patients with cirrhosis of the liver, or constantly taking drugs that can cause hyponatremia) and usually disappears when the drug is canceled.

With the development of serotonin syndrome, the drug should be immediately canceled and symptomatic treatment prescribed.

Caution should be used with escitalopram in patients with a history of mania / hypomania. With the development of a manic state, escitalopram must be canceled.

Malignant neuroleptic syndrome (NNS) is a rare, potentially dangerous condition associated with the use of antidepressants, including escitalopram. Symptoms of ZNS: fever (hyperpyrexia), muscle rigidity, change in mental status and instability of the autonomic nervous system (arrhythmia, fluctuations in blood pressure, tachycardia, profuse sweating, heart rhythm disturbance). At detection of ZNS it is necessary to stop use of the drug Elyceya® immediately.

During the first two weeks, the development of akathisia / psychomotor agitation (subjectively unpleasant or annoying anxiety and the need for movement, often in combination with the inability to sit or stand still) is possible.

At use of the drug Elitseya® development of skin hemorrhages (an ecchymosis and purpura) is possible. It is necessary with caution to apply escitalopram in patients with a tendency to bleeding, as well as taking indirect anticoagulants and other drugs that affect blood clotting.

Simultaneous use of esciopalopram and ethanol is not recommended.

Clinical experience with electroconvulsive therapy (ECT) and escitalopram is limited, so caution is advised.

Limited experience with the use of escitalopram in patients with coronary artery disease, so the drug Elyceya® is recommended to be used with caution in this group of patients.

With rapid withdrawal of therapy with escitalopram, a syndrome of "withdrawal" often occurs: dizziness, sensory disturbances (including paresthesias), sleep disorders (insomnia, unusual dreams), psychomotor agitation, anxiety, nausea and / or vomiting, tremor, confusion, sweating, headache, diarrhea, palpitations, emotional lability and visual disturbances. The severity of these reactions is usually mild or moderate and the duration is limited. In this regard, the drug Elycea® It is recommended to cancel gradually, reducing the dose over several weeks or months.

Interactions with other drugs and other forms of interactions

Simultaneous use with MAO-A inhibitors is contraindicated (risk of developing serotonin syndrome).

With simultaneous use with serotonergic drugs (tramadol, Sumatriptan and other triptans) caution must be exercised (risk of developing serotonin syndrome). Doses of selegiline up to 10 mg per day were safely administered with racemic citalopram.

Concurrent use of escitalopram and pimozide is contraindicated.

The simultaneous use of drugs that reduce the threshold of convulsive readiness (tricyclic antidepressants, antipsychotics - phenothiazine, thioxanthene, butyrophenone, mefloquine, bupropion and tramadol derivatives) increases the risk of seizures.

With the simultaneous use of escitalopram with indirect anticoagulants and pills, which affect the culture of the cross-functional societies, they are at the level of anti-depressants and pills; therapy and its termination (the risk of bleeding).

The simultaneous use of escitalopram and ethanol is not recommended.

Caution should be taken with escitalopram simultaneously with inhibitors of the CYP2C19 isoenzyme (for example, Omeprazole , esomeprazole, fluvoxamine, lansoprazole, ticlopidine) or cimetidine, since the concentration of escitalopram in plasma increases, and therefore, you may need to reduce the dose of escitalopram.

Simultaneous use with metoprolol or desipramine can lead to a twofold increase in the concentrations of the last two drugs.

Drug Elyceya® not used during pregnancy (safety is not established).

Influence on ability to drive a car and other cars

during the period of treatment, it is necessary to refrain from driving vehicles and practicing potentially hazardous activities that require increased concentration and psychomotor speed due to the possibility of dizziness, hallucinations, confusion, depersonalization, and other side effects.

Classification of the incidence of side effects (WHO):

very rarely from <1/10000, including individual messages.

Since the cardiovascular system:

From the hemopoietic system:

From the nervous system:

On the part of the respiratory system:

From the digestive system:

From the genitourinary system: