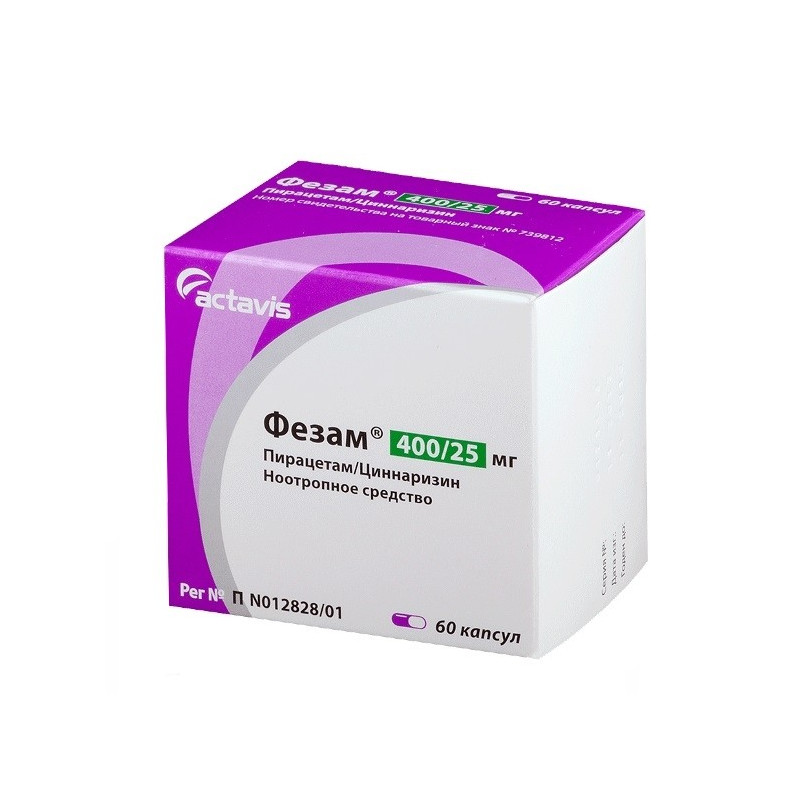 Phezam is a combined drug with a pronounced antihypoxic, nootropic and vasodilating action.
Piracetam - nootropic agent. It activates metabolic processes in the brain by increasing energy and protein metabolism, accelerating the utilization of glucose by cells and increasing their resistance to hypoxia. Improves interneuronal transmission in the central nervous system and regional blood flow in the ischemic zone.
Cinnarizine - Calcium channel blocker. It inhibits the entry of calcium ions into the cells and reduces their content in the plasmolemma depot. Reduces the tone of smooth muscle arterioles, reduces their response to biogenic vasoconstrictor substances (epinephrine, norepinephrine, dopamine, angiotensin, vasopressin). It has a vasodilating effect (especially in relation to the vessels of the brain, enhancing the antihypoxic effect of piracetam), without having a significant effect on blood pressure. Shows moderate antihistamine activity, reduces the excitability of the vestibular apparatus,increases the tone of the sympathetic nervous system. Increases the elasticity of erythrocyte membranes, their ability to deform, reduces blood viscosity.

- insufficiency of cerebral circulation (atherosclerosis of the brain vessels, the recovery period of ischemic and hemorrhagic strokes, after craniocerebral injuries, encephalopathy of various genesis);
- intoxication;
- diseases of the central nervous system, accompanied by a decrease in intellectual-mnestic functions (impaired memory, attention, mood);
- psychoorganic syndrome with a predominance of symptoms of asthenia and adynamia;
- asthenic syndrome;
- labyrinthopathy;
- Meniere's syndrome;
- prevention of kinetozov;
- prevention of migraine;
- the lag of intellectual development in children.

- severe abnormal liver function;
- Severe renal dysfunction;
- parkinsonism;
- pregnancy;
- lactation;
- children's age up to 5 years;
- hypersensitivity to the drug.
with caution should be prescribed the drug for Parkinson's disease.

ATadults the drug is prescribed in 1-2 caps. 3 times / day for 1-3 months depending on the severity of the disease. The course of treatment is 2-3 times a year.
Children over 5 years old designate 1-2 caps. 1-2 times / day (no more than 3 months).

The results of clinical studies have allowed to establish that the drug Phezam helps to improve visual acuity, improves the functional state of the retina and hemodynamics of the eye. The increase in blood flow velocity in the arteries of the eye after a course of administration of the drug Phezam indicates an improvement in the blood supply to the eye membranes. It is recommended to use the drug Phezam in the treatment of patients with degenerative diseases of the retina (in particular with age-related macular degeneration).
The combination of vasoactive (cinnarizine) and metabolic (piracetam) components of the drug Phezam allowed in a number of clinical studies to use the drug to increase the effectiveness of existing methods of treatment of functional and organic lesions of the visual-nervous apparatus of the eye in children and to stabilize the achieved visual functions. Recommendations for the use of the drug Phezam in pediatric practice (as part of complex therapy) are: partial atrophy of the optic nerve of various origins; moderate to high myopia; post-traumatic, myopic and hereditary retinal dystrophy; amblyopia of various genesis (including in combination with organic lesions of the central parts of the visual analyzer).
In case of renal failure of mild and moderate severity (CC less than 60 ml / min), the therapeutic dose should be reduced or the interval between doses of the drug should be increased.
In patients with impaired liver function, it is necessary to control the content of liver enzymes.
You should avoid drinking alcohol while taking Phezam.
The drug Phezam should be carefully prescribed with elevated intraocular pressure.
The drug can cause a positive reaction in athletes during the doping test, and it is also possible to change the results of determining radioactive Iodine (the dyes in the capsule shell contain iodine).
Influence on ability to drive motor transport and control mechanisms
While taking the drug Phezam should be careful when driving and working with machines and equipment.

With simultaneous use with Phezam, it is possible to increase the sedative effect of the agents that inhibit the activity of the central nervous system, as well as ethanol, nootropic and antihypertensive drugs.
With simultaneous use of vasodilators enhance the effect of Phezam.
Phezam improves the tolerability of antipsychotic drugs and tricyclic antidepressants.

The drug should be stored in a dry, dark place and out of reach of children at a temperature of 15 ° to 25 ° C.