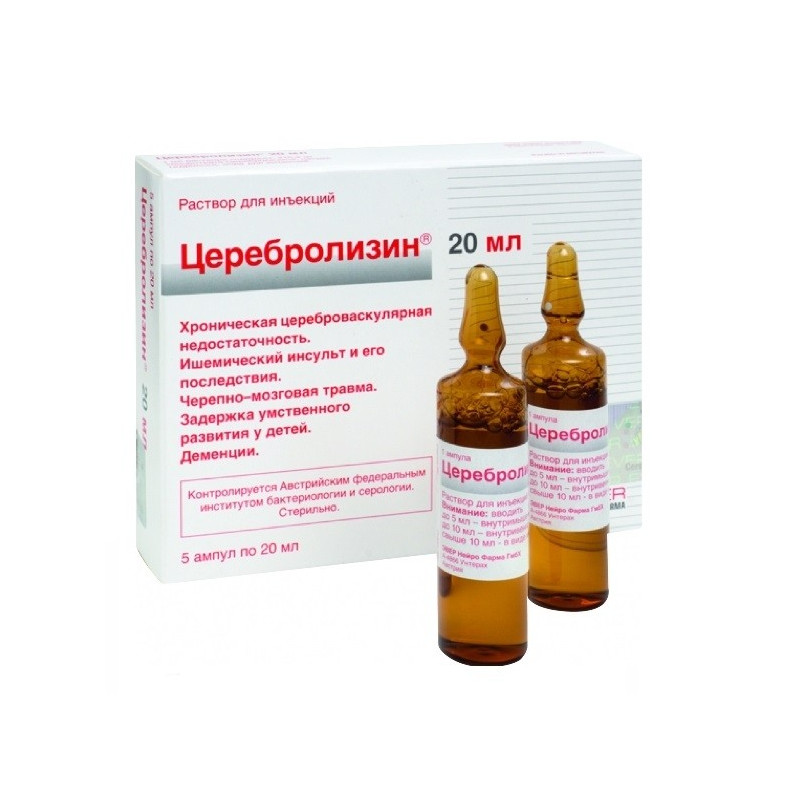 Metabolic regulation: drug Cerebrolysin® improves the efficiency of the aerobic energy metabolism of the brain, improves intracellular protein synthesis in the developing and aging brain.

Neuroprotection: the drug protects neurons from the damaging effect of lactic acidosis, prevents the formation of free radicals, increases survival and prevents neuron death in conditions of hypoxia and ischemia, reduces the damaging neurotoxic effect of excitatory amino acids (glutamate).

Neurotrophic activity: drug Cerebrolysin® - the only nootropic peptidergic drug with proven neurotrophic activity, similar to the action of natural neuronal growth factors (NGF), but manifested under conditions of peripheral administration.

Functional neuromodulation: the drug has a positive effect on cognitive impairment on memory processes.

The complex composition of the drug Cerebrolysin®, the active fraction of which consists of a balanced and stable mixture of biologically active oligopeptides, which have a total multifunctional action, does not allow for the usual pharmacokinetic analysis of individual components.

- syndrome of dementia of various genesis;

- traumatic injuries of the brain and spinal cord;

- endogenous depression resistant to antidepressants (as part of complex therapy).

The drug is used parenterally. The dose and duration of use depend on the nature and severity of the disease, as well as on the age of the patient. Perhaps a single injection of the drug in a dose of up to 50 ml, but more preferably a course of treatment.

The recommended course of treatment is a daily injection for 10–20 days.

To improve the effectiveness of treatment, repeated courses can be held as long as there is an improvement in the patient’s condition due to treatment. After the first course, the frequency of injections can be reduced to 2 or 3 times a week.

Cerebrolysin® used parenterally in the form of a / m injection (up to 5 ml) and / in injection (up to 10 ml). The drug in a dose of 10 ml to 50 ml is recommended to be administered only by means of slow intravenous infusions after dilution with standard solutions for infusions. The duration of infusions is from 15 to 60 minutes.

Nervous system: rarely - too fast a drug can cause dizziness; very rarely - isolated cases of generalized epilepsy and one case of seizures was associated with Cerebrolysin.

Cardiovascular: very rarely - too fast a drug can lead to increased heart rate and arrhythmias.

Dermatological: very rarely - skin reactions; rarely, with an excessively rapid administration, a sensation of heat, sweating, and itching is possible.

According to the results of one study, a connection was reported between the use of the drug in rare cases (from> 1/10 000 to <1/1000) with hyperventilation, arterial hypertension, hypotension, fatigue, tremor, the possible development of depression, apathy and / or drowsiness, flu-like symptoms (cold, cough, respiratory tract infection).

Since Cerebrolysin® used mainly in elderly patients, the above symptoms of the disease are typical for this age group and often also occur without taking the drug.

Notification in case of suspected side effects

It is important to report side effects after a drug is registered in order to ensure continuous monitoring of the risk / benefit ratio of the drug. Medical workers are asked to report all cases of side effects observed when using the drug through the national systems of reporting adverse reactions and / or at the representative office of the company.

- Hypersensitivity to the drug.

WITH caution It should appoint a drug for allergic diathesis, epileptic diseases, including with generalized epilepsy, due to the possible increase in the frequency of attacks.

During pregnancy and during breastfeeding Cerebrolysin® should be used only after a careful analysis of the ratio of the positive effect of treatment and the risk associated with its implementation.

results experimental studies give no reason to believe that Cerebrolysin® has any teratogenic effect or has a toxic effect on the fetus.However, similar clinical studies have not been conducted.

If the injection is too fast, you may feel hot, sweating, dizziness. Therefore, the drug should be administered slowly.

Compatibility of the drug was tested and confirmed (within 24 hours at room temperature and the presence of light) with the following standard solutions for infusions: 0.9% sodium chloride solution, Ringer's solution, 5% dextrose (glucose) solution.

Allowed simultaneous use of the drug Cerebrolysin® with Vitamins and drugs that improve heart circulation, but these drugs should not be mixed in the same syringe with Cerebrolysin.

You should use only a clear solution of Cerebrolysin and only once.

Clinical studies have shown that Cerebrolysin® It does not affect the ability to drive and use machinery.

About cases of drug overdose Cerebrolysin® not reported.

Given the pharmacological profile of the drug Cerebrolysin® special attention should be paid to possible additive effects when co-administered with antidepressants or MAO inhibitors . In such cases, it is recommended to reduce the dose of antidepressant. Use of the drug Cerebrolysin® in high doses (30-40 ml) in combination with MAO inhibitors in high doses can cause an increase in blood pressure.

Do not mix in the same infusion solution Cerebrolysin® and balanced solutions of amino acids.

The drug should be stored out of the reach of children, protected from light at a temperature not higher than 25 ° C. The shelf life of the drug in ampoules is 5 years, in bottles - 4 years. Do not use after the expiration date printed on the package.

The drug is available on prescription.