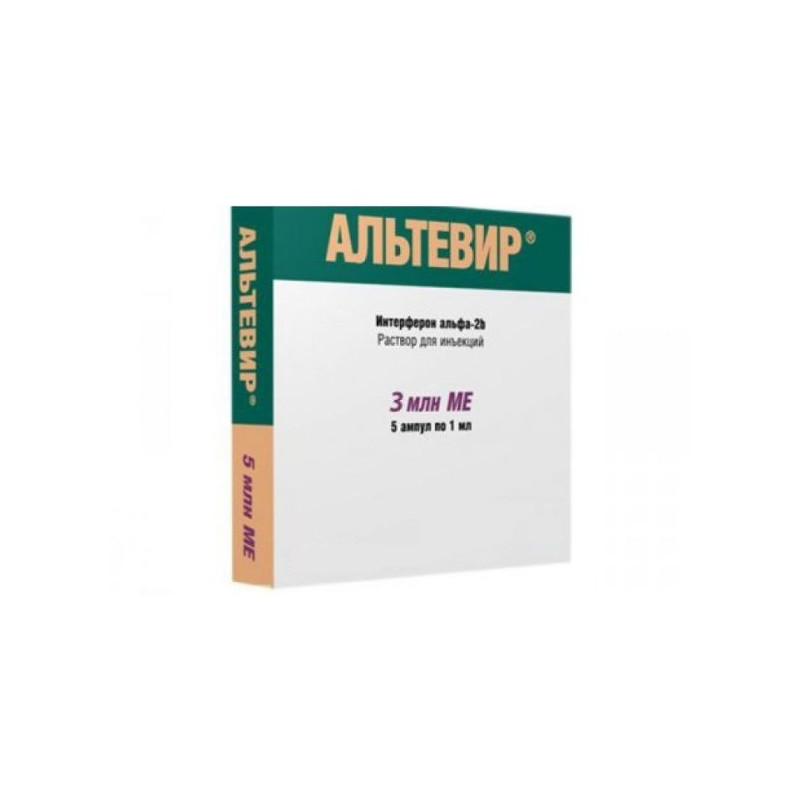 Altevirâ has antiviral, immunomodulatory, antiproliferative and antitumor effects. Interferon alpha-2b, interacting with specific receptors on the cell surface, initiates a complex chain of changes within the cell, including the induction of the synthesis of a number of specific cytokines and enzymes, violates the synthesis of viral ribonucleic acid (RNA) and virus proteins in the cell. The result of these changes is non-specific antiviral and anti-proliferative activity associated with the prevention of viral replication in the cell, inhibition of cell proliferation and the immunomodulatory effects of interferon. Interferon alpha-2b stimulates the process of antigen presentation to immunocompetent cells, has the ability to stimulate the phagocytic activity of macrophages, as well as the cytotoxic activity of T-cells and "natural killer cells" involved in antiviral immunity. Prevents cell proliferation, especially tumor. It has a depressing effect on the synthesis of certain oncogenes, leading to inhibition of tumor growth.

Pharmacokinetics. When s / c or / m injection of interferon alfa-2b, its bioavailability is from 80% to 100%. Time to reach Cmax makes 4-12 h, T1/2 - 2-6 h, respectively.After 16 to 24 hours after administration, the recombinant interferon in the serum is not detected. Metabolism is carried out in the liver. Interferons alpha can interfere with oxidative metabolic processes, reducing the activity of “liver” microsomal enzymes of the cytochrome P450 system. Excreted mainly by the kidneys by glomerular filtration.

- in chronic viral hepatitis B without signs of cirrhosis of the liver;

- With chronic viral hepatitis C in the absence of signs of liver failure (monotherapy or combination therapy with ribavirin);

- with papillomatosis of the larynx, genital warts;

Hypersensitivity to recombinant interferon alpha-2b or any of the components of the drug. A history of cardiovascular diseases (uncontrolled chronic heart failure, myocardial infarction, marked cardiac arrhythmias during the previous 6 months). Severe renal and / or liver failure, including caused by the presence of metastases. Epilepsy and other severe dysfunctions of the central nervous system, especially those expressed by depression, suicidal thoughts and attempts (including a history of). Chronic hepatitis with decompensated cirrhosis of the liver.

Autoimmune hepatitis or other autoimmune disease, a disease of the thyroid gland that is not amenable to control by conventional therapeutic methods.

Children's age up to 18 years.

Drug Altevirâ do not apply during pregnancy and breastfeeding.

Chronic hepatitis C: Altevirâ n / a or im administered in a dose of 3 million ME 3 times a week for 24–48 weeks. In patients with a relapsing course of the disease and patients who have not previously received treatment with interferon alpha-2b, the effectiveness of treatment increases when using combination therapy with Ribavirin. The duration of combination therapy is at least 24 weeks. Patients with the 1st genotype of the chronic hepatitis C virus and high viral load, in whom by the end of the first 24 weeks of treatment, the serum of the hepatitis C virus is not detected in the serum, Altevir therapyâ should spend 48 weeks.

Chronic hepatitis B: Altevirâ n / a or im administered in a dose of 5–10 million ME 3 times a week for 16–24 weeks. In the absence of positive dynamics (according to the determination of the DNA of the hepatitis B virus), after 3-4 months of use, treatment is stopped.

Laryngeal papillomatosis: Altevirâ enter n / a dose of 3 million IU / m2 3 times a week. Treatment begins after surgical (or laser) removal of tumor tissue. The dose is selected taking into account the tolerability of the drug. Achieving a positive response may require treatment for 6 months.

Hairy cell leukemia: recommended dose of Alteviraâ for s / c administration to patients after splenectomy or without it is 2 million IU / m2 3 times a week. In most cases, the normalization of one or more hematological parameters occurs within 1-2 months. treatment. This dosing regimen should be adhered to continuously, if this does not lead to the rapid progression of the disease or the onset of symptoms of severe intolerance to the drug.

Chronic myeloid leukemia: recommended dose of Alteviraâ as monotherapy - 4-5 million IU / m2 per day p / k daily. If treatment allows to achieve control of the number of leukocytes, then to maintain hematological remission, the drug should be used in the maximum tolerated dose (4-5 million IU / m2 daily). If therapy after 8-12 weeks did not lead to partial hematological remission or a clinically significant reduction in the number of leukocytes, the drug should be discontinued.

Non-Hodgkin's lymphoma: Altevirâ used as adjuvant therapy in combination with standard Chemotherapy regimens s / c at a dose of 5 million IU / m2 3 times a week for 2-3 months. The dose must be adjusted depending on the tolerability of the drug.

48 weeks. The dose must be adjusted depending on the tolerability of the drug.

Preparation of the solution for the on / in the introduction: gaining a volume of solution Alteviraârequired to prepare the required dose, add to 100 ml of sterile 0.9% sodium chloride solution and inject over 20 minutes. The solution is prepared immediately before the implementation of the procedure of intravenous administration, this solution is not subject to storage.

Multiple myeloma: Altevirâ prescribed in the period of achieving sustainable remission in a dose of 3 million IU / m2 3 times a week p / k.

Kaposi's sarcoma in AIDS patients: optimal dose not established. The drug can be used in doses of 10-12 million IU / m2 per day p / k or / m. In case of stabilization of the disease or positive dynamics, the therapy is continued until the tumor regresses or the drug is withdrawn.

Kidney cancer. The optimal dose and pattern of use have not been established. It is recommended to apply sc in doses from 3 to 10 million IU / m2 3 times a week.

Most often at the beginning of the drug Altevirâ interferon-like flu-like syndrome (fever, chills, headache, muscle and / or joint pain, weakness, nausea) may occur. These manifestations are usually moderately pronounced, are observed at the beginning of treatment and decrease with continued treatment.

Reactions from the digestive system

Reactions from the nervous system

Reactions from the cardiovascular system.

Reactions from the skin and subcutaneous tissue

Reactions from the musculoskeletal system

Interferons can affect the function of the thyroid gland, very rarely causing the development of autoimmune thyroiditis. Against the background of long-term use of the drug Altevir, it is necessary to monitor thyroid hormone levels once in 6 months.

Rarely, changes in laboratory parameters can be observed: leukopenia, granulocytopenia, decrease in hemoglobin, thrombocytopenia, increased activity of liver enzymes. These changes are dose-dependent and reversible and disappear within 72 hours after a break in treatment or its cessation.

There have been no cases of unintentional overdose in clinical studies. In case of overdosing, including an increase in one-time volume or frequency of admission per week, immediately inform your doctor. In the event of an overdose, the patient should be hospitalized for follow-up and, if necessary, maintenance therapy.

Interaction with other drugs

Altevira interaction® with other drugs not fully understood. Be careful with Altevir.® simultaneously with hypnotics and sedatives, narcotic analgesics and drugs that have a myelosuppressive effect.

With the simultaneous use of Altevira® and theophylline it is necessary to control the concentration of the latter in the serum and, if necessary, change the mode of its dosing.

In case of side effects during treatment with Altevirâ the dose of the drug should be reduced by 50% or temporarily cancel the drug until they disappear. If side effects persist or reappear after dose reduction, or disease progression is observed, then Altevir treatmentâ should stop.

When platelet count drops below 50 × 109/ l or granulocyte levels below 0.75 × 109/ l recommended dose reduction Alteviraâ 2 times with a blood test after 1 week. If the specified changes are saved, Altevir® should cancel.

When platelet levels drop below 25 × 109/ l or granulocyte level below 0.5 × 109/ l recommended the abolition of the drug with the control of the blood test after 1 week.

Before starting treatment Altevirâ chronic hepatitis B and C is recommended to conduct a liver biopsy to assess the degree of liver damage (signs of active inflammation and / or fibrosis). The effectiveness of the treatment of chronic hepatitis C is increased with the combination therapy with Altevirâ and ribavirin. Altevira applicationâ not effective in the development of decompensated cirrhosis or hepatic coma.

In patients receiving interferon alfa-2b, antibodies may appear in the serum to neutralize its antiviral activity. In almost all cases, antibody titers are low, their appearance does not lead to a decrease in the effectiveness of treatment or the occurrence of autoimmune disorders.

If a dose is missed, the injections are continued, keeping the administration interval and not increasing the subsequent dose.

Influence on ability to drive vehicles and mechanisms

In sterile glass injection syringes with a glued-in needle and a protective cap made of polypropylene with an insert of 1 ml of rubber containing 3 million IU / ml. For 1 filled syringe in a blister pack, 1 blister pack in a carton box.

In each pack enclosed instructions for use.