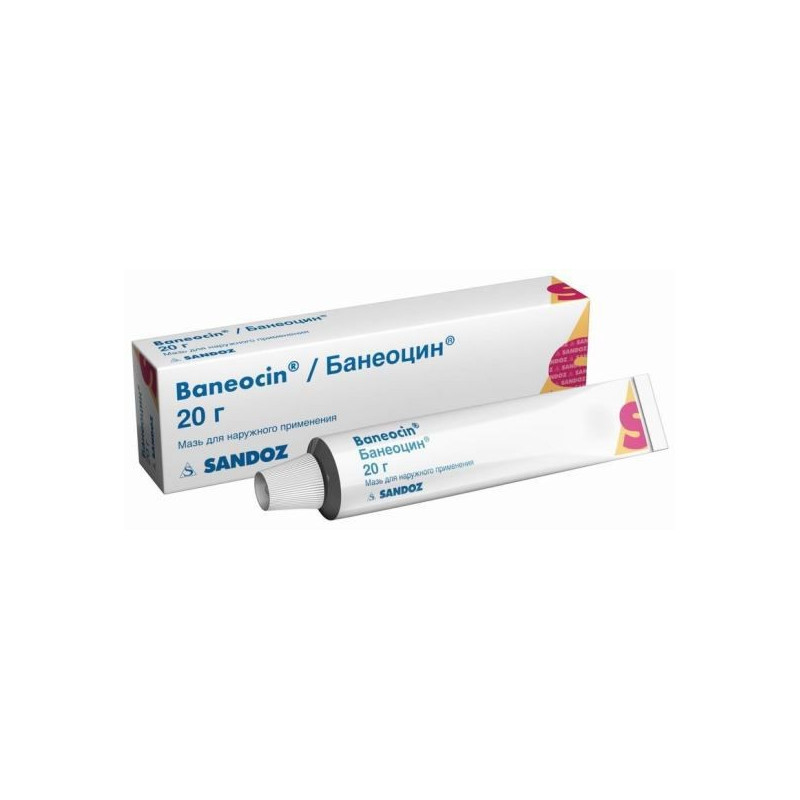 Baneocin is an antibiotic combination for topical use only. It contains two highly effective (bactericidal) antibacterial drugs, neomycin and bacitracin with a synergistic effect.
Bacitracin is active mainly against gram-positive microorganisms, for example, hemolytic streptococcus, staphylococcus, Clostridia, Corynebacterium diphteriae, and also Treponema pallidum and some gram-negative pathogens such as Neisseria and Haemophilus influenzae. Its action also extends to actinomycetes and fusobacteria. Resistance to bacitracin is extremely rare. Neomitsin affects the Gramma monocytogenes, Escherichia coli and Mycobacterium tuberculosis. Borellia and Leptospira interrogans (L. icterohamororhagicae) are also suppressed by this drug. The combined effect of the two drugs provides a broad antimicrobial spectrum, which, however, does not include pseudomonads, fungi, viruses.
Usually bacitracin and neomycin are not administered systemically. Topical use of powder and ointment Baneocin significantly reduces the risk of sensitization, which is characteristic of the systemic use of antibiotics.
Baneocin is well tolerated. Tissue tolerability is regarded as excellent, inactivation by biological products, blood and tissue components is not observed. If the drug is applied to extensive skin lesions, consideration should be given to the possibility of absorption of the drug and its effects (see "Side effects", "Interaction with other drugs", "Contraindications", "Special precautions for safe use").

Baneocin is effective in all infections caused by neomycin and / or bacitracin-sensitive microorganisms. The effect of ointment Baneotsin rises under the bandage.

- Bacterial infections of the skin of limited prevalence, for example, bacterial infections with Herpes simplex and Herpes zoster / or with chickenpox vesicles, weeping contagious impetigo, infected with varicose ulcers, eczema infected, bacterial diaper dermatitis.
- Prevention of umbilical infection in newborns
- After surgical (dermatological) procedures
Baneotsin powder can be used for additional treatment in the postoperative period (excision and cautery, treatment of cracks, perineal tears and episiotomy, weeping wounds and abrasions.

- Focal skin infections, for example:
Boils, carbuncles (after surgical treatment), folliculitis of the scalp, purulent hydrodenitis, pseudofurunkula, paronychia
- Bacterial skin infections of limited prevalence, for example:
contagious impetigo, infected varicose ulcers, with secondary bacterial eczema, secondary infection with dermatoses, cuts, abrasions, burns, in cosmetic surgery and during skin transplantation (also for prophylactic use and under a bandage).
- After large and small surgical interventions
Ointment Baneotsin can be used as an additional treatment in the postoperative period:
Applying Baneocin ointment on gauze strips is preferable for the targeted local treatment of patients with infected cavities and wounds (for example, infections of the external auditory canal, wounds or surgical incisions that heal by secondary tension).

A history of hypersensitivity to bacitracin and / or neomycin, or to other aminoglycoside antibiotics.
Baneocin should not be used for significant skin lesions, as absorption of the drug may cause an ototoxic effect with hearing loss.
Baneocin should not be used in patients with severe violations of the excretory function, including renal etiology, and already having lesions of the vestibular and cochlear systems,in cases where uncontrolled absorption of the drug is possible.
Do not use in the ear canal when perforating the eardrum.
Do not apply on eyes.

Apply the required amount of ointment or powder to the site of treatment, if appropriate, under the bandage.

As a rule, in adults and children, Baneocin powder is applied two to four times a day, while Baneocin ointment is used two to three times a day.
In patients with burns that occupy more than 20% of the body surface, Baneocin powder should not be used more than once a day, especially in case of a decrease in kidney function, since absorption of the active ingredient may occur.
When applied topically, the dose of neomycin should not exceed 1 g per day (corresponding to 200 g of powder or ointment) for 7 days. When you re-rate the maximum dose should be reduced by half.

Allergic reactions: with prolonged use - redness, dry skin, skin rash, itching. In the treatment of chronic dermatoses or chronic otitis media, Baneocin promotes sensitization to other drugs, including neomycin. This can manifest itself in the low efficiency of treatment. Allergic reactions such as contact eczema were less common than usual (associated with cross-allergy to other aminoglycosides in about 50% of cases).
System effects: with extensive lesions of the skin should take into account the possibility of absorption of the drug and the development of oto-and nephrotoxic effects and disorders of neuromuscular conductivity.

When used in doses significantly higher than recommended, due to the possible absorption of Baneocin, attention should be paid to symptoms indicating nephro- and / or ototoxic reactions, especially in patients with trophic ulcers. Since the risk of toxic effects increases with a decrease in liver and / or kidney function, in patients with hepatic and / or renal insufficiency, blood and urine tests should be performed along with an audiometric study before and during intensive therapy with Baneocin.
Precautions should be observed in case of prolonged use of the drug in patients with chronic otitis media due to possible ototoksicheskogo effect, do not use the drug in the external auditory perforation of the eardrum. If there is an uncontrolled absorption of Baneocin, attention should be paid to the potential block of neuromuscular conduction, especially in patients with acidosis, myasthenia gravis and other diseases of the neuromuscular apparatus.
With long-term treatment, attention should be paid to the possible growth of resistant microorganisms, especially fungi. In such cases, appropriate treatment should be prescribed.
For patients who have developed allergies and superinfection, the drug should be discontinued.

In cases where it is impossible to control the absorption of the drug in pregnant and lactating women, Baneocin should be used with caution. Like all other aminoglycosides, neomycin penetrates the placental barrier.With systemic use of aminoglycosides in a high dose, the development of damage to the cochlear apparatus in the fetus was noted.

If systemic absorption occurs, the concomitant administration of cephalosporins or other aminoglycoside antibiotics may increase the likelihood of a nephrotoxic reaction.
The simultaneous use of diuretics such as ethacrynic acid or Furosemide can provoke an oto- and nephrotoxic effect.
Baneocin absorption can potentiate the effects of the neuromuscular block in patients receiving drugs, anesthetics and muscle relaxants.

Store at temperatures below 25 ° C in a dark place. The powder should be stored in a dry place.