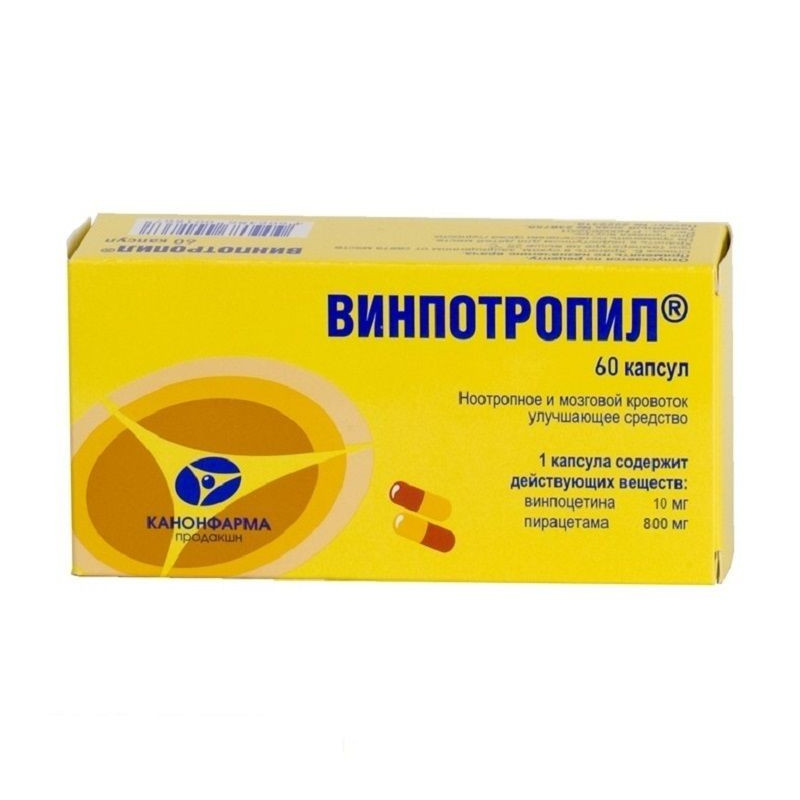 Trade name of the drug: Vinpotropile ®

Description:
The pills are oval, with a risk, film-coated light brown color with a grayish tint. In cross section, almost white.

Pharmacological properties:
Pharmacodynamics
Vinpotropile® - combination drug. Possesses properties characteristic of an agent that improves cerebral blood flow (Vinpocetine), and for nootropic drugs (piracetam).
As a means of improving cerebral blood flow
It improves brain metabolism by increasing the consumption of glucose and oxygen by the brain tissue. Increases the resistance of neurons to hypoxia, enhances glucose transport to the brain through the blood-brain barrier; translates the process of glucose decomposition into an energetically more economical, aerobic way; selectively blocks Ca2 + -dependent phosphodiesterase; increases levels of adenosine monophosphate (AMP), cyclic guanosine monophosphate (cGMP), and adenosine triphosphate (ATP) of the brain. Strengthens the exchange of norepinephrine and brain serotonin; has an antioxidant effect. Reduces platelet aggregation and increased blood viscosity; increases the elasticity of erythrocytes and blocks the utilization of adenosine by erythrocytes; promotes increase in return by erythrocytes of oxygen. Increases cerebral blood flow; reduces the resistance of cerebral vessels without significant changes in the systemic circulation. It does not have the effect of “stealing” and increases the blood supply, primarily in ischemic brain areas. It penetrates the placental barrier.
As a nootropic agent
Improves the integrative activity of the brain, contributes to the consolidation of memory, facilitates the learning process; changes the speed of propagation of excitation in the brain, improves microcirculation, without exerting a vasodilator action,inhibits the aggregation of activated platelets; has a protective effect in case of brain damage caused by hypoxia, intoxication, electroshock; enhances α- and β-activity, reduces δ-activity on the electroencephalogram, reduces the severity of vestibular nystagmus; improves communication between the cerebral hemispheres and synaptic conduction in neocortical structures, increases mental alertness, and increases cerebral blood flow; does not have a sedative, psychostimulating effect. The effect develops gradually.
It has a pronounced effect on the symptoms of the initial manifestations of cognitive impairment of cerebrovascular origin in elderly and senile patients. Recommended in psycho-geriatric practice.
Pharmacokinetics
Vinpocetine is rapidly absorbed. Therapeutic concentration in plasma - 10-20 ng / ml. The time to reach the maximum concentration in the blood plasma is 1 hour. Absorption occurs mainly in the proximal gastrointestinal tract. When passing through the intestinal wall is not metabolized. The maximum tissue concentration is noted 2-4 hours after ingestion. Communication with proteins - 66%, bioavailability when administered orally - 7%. The clearance of 66.7 l / h exceeds the plasma volume of the liver (50 l / h), which indicates extrahepatic metabolism. The main metabolite is apovincaminic acid, which has some pharmacological activity.Other inactive metabolites are hydroxy-vinpocetine, hydroxy-apovincaminic acid, hydroxy-vinpocetin-glycinate. With repeated techniques, the kinetics is linear. The human elimination half-life (T1 / 2) is 4.83 ± 1.29 hours. It is excreted by the kidneys and through the intestine in a 3: 2 ratio.
Piracetam after oral administration is well absorbed and penetrates into various organs and tissues. Bioavailability is about 100%. After a single ingestion in a dose of 3.2 g, the maximum concentration is 84 μg / ml, after repeated (3.2 g 3 times a day) 115 μg / ml. The time to reach the maximum concentration in plasma is 1 hour, the cerebrospinal fluid - 5 hours. The volume of distribution is about 0.6 l / kg. It penetrates the hematoencephalic and placental barriers, selectively accumulates in the tissues of the cerebral cortex. Practically not subjected to biotransformation and excreted by the kidneys in unchanged form by glomerular filtration. Total clearance 80-90 ml / min. T1 / 2 from plasma - 4-5 h, from cerebrospinal fluid - 8.5 h.

Indications for use:
Insufficiency of cerebral circulation (recovery period of ischemic and hemorrhagic stroke); chronic insufficiency of cerebral circulation of hypertensive and posttraumatic genesis, parkinsonism of vascular genesis, intoxication; psychoorganic syndrome with a predominance of signs of asthenia and adynamia; symptomatic treatment of vertigo; prevention of migraine and kinetoz.

Dosage and administration:
The course of treatment and dosage is determined by the attending physician.
For patients 18 years and older: by mouth, regardless of food intake, 1 pill 2 - 3 times a day, drinking plenty of water. Last admission - 4 hours before bedtime. The duration of treatment is from 2-3 weeks to 2-6 months. Before discontinuation of the drug, it is recommended to gradually reduce the dose (possibly using the drug Vinpotropile® in another dosage form: capsules containing 5 mg of vinpocetine and 400 mg of piracetam).

Interaction with other drugs:
Increases: the risk of hemorrhagic complications on the background of Heparin therapy, the effects of thyroid hormones, antipsychotics (neuroleptics), psychostimulants, indirect anticoagulants, including acenocoumarol (a more pronounced decrease in platelet aggregation, fibrinogen content, Willebrand factor, viscosity of the plasma, viscosity of the plasma plasma viscosity
A slight increase in the hypotensive effect is possible with simultaneous use with methyldopa (control of blood pressure is necessary).
Weakens: effect of anticonvulsant drugs (reduces convulsive threshold).
Despite the lack of data confirming the possibility of interaction, it is recommended that caution be exercised while simultaneously prescribing with drugs of a central, anti-arrhythmic action.

Special instructions:
The presence of prolonged QT syndrome and the use of drugs that cause lengthening of the QT interval, requires periodic monitoring of the ECG. Due to the effect of piracetam on platelet aggregation, caution is recommended when prescribing the drug to patients with impaired hemostasis, during major surgery, or to patients with symptoms of severe bleeding.
Influence on ability to drive motor transport and control mechanisms
During the period of treatment, care should be taken when driving vehicles and working with mechanisms.

Storage conditions:
In a dry, dark place at a temperature not higher than 25 ° C.
Keep out of the reach of children.