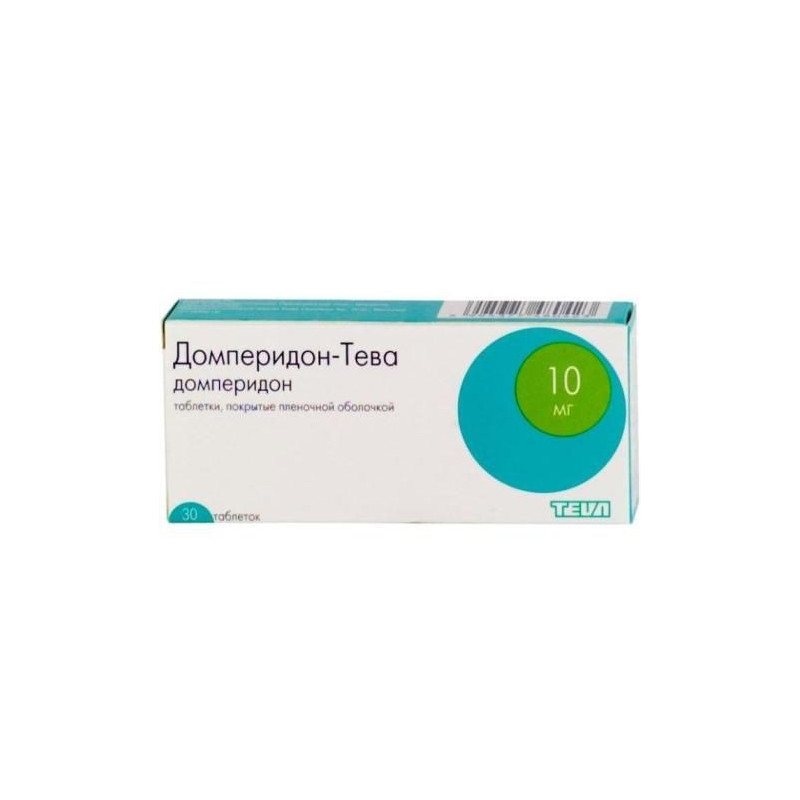 An antiemetic drug of central action that blocks dopamine receptors

Domperidone is a dopamine receptor blocker with antiemetic effects. The antiemetic effect is due to a combination of peripheral (gastrokinetic) action and inhibition of dopamine receptors in the trigger zone of the brain chemoreceptors located outside the blood-brain barrier in the areapostrema area. When ingested, Domperidone increases the reduced pressure in the esophagus, improves antroduodenal motility and accelerates gastric emptying, without affecting gastric secretion. Domperidone increases the secretion of prolactin in the pituitary gland.

When ingested on an empty stomach domperidone is rapidly absorbed, its Cmax in plasma are reached within 30-60 minutes. Low absolute bioavailability after ingestion (about 15%) is due to the effect of "first passage" through the liver. Although in healthy volunteers, the bioavailability of domperidone increases when taken after a meal, patients with complaints from the gastrointestinal tract should take domperidone 15-30 minutes before a meal. With a decrease in the acidity of gastric juice, there is a violation of the absorption of domperidone. Preliminary intake of cimetidine and sodium bicarbonate reduces the bioavailability of domperidone. When ingested after a meal, a slightly longer time is required to achieve maximum absorption.

Metabolism of domperidone occurs in the liver and in the intestinal wall by hydroxylation and N-dealkylation with the participation of isoenzymes CYP3A4, CYP1A2 and CYP2E1.

Pharmacokinetics in special groups of patients. In patients with serum creatinine concentrations greater than 0.6 mmol / l T1/2 ranges from 7.4 to 20.8 h, while the concentration of domperidone in the blood plasma is reduced.

Indications for use of the drug

Dyspeptic symptoms, such as nausea, vomiting, feeling of fullness in the epigastric region, discomfort in the upper abdomen and regurgitation of gastric contents.

Inside before eating, drinking plenty of water.

Adults and children weighing more than 35 kg 1-2 pills 3-4 times a day. The maximum dose is 80 mg per day.The duration of treatment is 4 weeks. Further intake of the drug is possible after consulting a doctor.

Patients with renal insufficiency are recommended to reduce the frequency of taking the drug to 1-2 times a day.

On the part of the endocrine system: rarely, increased prolactin concentration.

Contraindications to the use of the drug

- hypersensitivity to domperidone or any other component of the drug;

- perforation of the gastrointestinal tract;

Use of the drug during pregnancy and lactation

The use of domperidone during pregnancy is allowed only if the expected benefit to the mother outweighs the possible risk to the fetus. At the time of application domperidone breastfeeding should be suspended.

Application for violations of the liver

With care: renal failure. Since only a very small amount of domperidone is excreted by the kidneys unchanged, it is hardly necessary to correct a single dose in patients with renal insufficiency. When reappointment frequency should be reduced to 1-2 times per day, depending on the severity of failure; a dose reduction may also be required. With prolonged therapy, such patients should be monitored regularly.

Domperidone-Teva contains lactose, so it should not be prescribed to patients with lactose intolerance, galactosemia, or impaired absorption of glucose or galactose.

Since only a very small amount of domperidone is excreted by the kidneys unchanged, it is hardly necessary to correct a single dose in patients with renal insufficiency. When reappointment frequency should be reduced to 1-2 times per day, depending on the severity of failure; a dose reduction may also be required. With prolonged therapy, such patients should be monitored regularly.Taking the drug after a meal slows down its absorption.

Impact on the ability to manage vehicles and work with equipment: does not affect.

Treatment: There is no specific antidote. In case of overdose, gastric lavage and the use of activated charcoal can be effective. Careful observation and supportive care is recommended.

For the relief of extrapyramidal disorders, m-cholinoblockers and drugs used to treat parkinsonism may be effective.

M-holinoblokatory can neutralize the effect of domperidone.

Do not take antacid and antisecretory drugs simultaneously with domperidone, as they reduce its bioavailability after ingestion.

The simultaneous intake of potent inhibitors of the CYP3A4 isoenzyme may cause an increase in plasma domperidone concentration. Ketoconazole inhibits CYP3A4-dependent primary metabolism of domperidone, resulting in approximately a threefold increase in Cmax Domperidone and AUC in the plateau phase.

The following drugs are also inhibitors of the CYP3A4 isoenzyme:

Domperidone can affect the absorption of simultaneously used oral preparations, in particular preparations with a slow release of the active substance, or preparations coated with an enteric coating. However, the use of domperidone in patients with Paracetamol or selected therapy with Digoxin did not affect the concentration of these drugs in the blood. Domperidone may also be combined with:

- neuroleptics, whose action it does not enhance;

- dopamine receptor agonists (bromocriptine, levodopa), the undesirable peripheral effects of which, such as digestive disorders, nausea, vomiting, it suppresses without neutralizing their basic properties.

The drug is approved for use as a means of OTC.

At a temperature not higher than 25 ° С. Keep out of the reach of children.