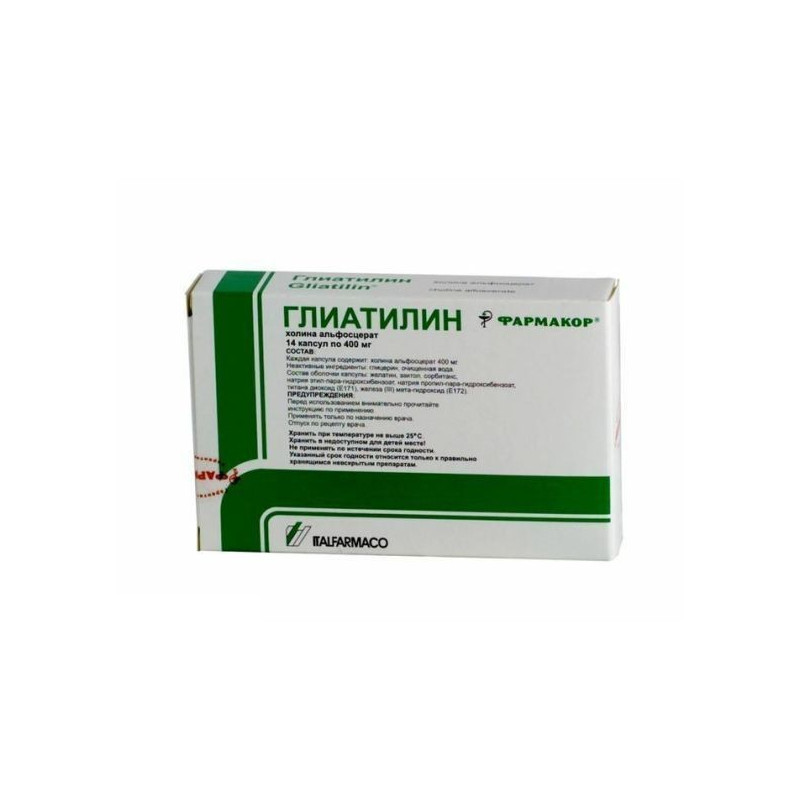 GLIATILIN - Nootropic drug. Cholinomimetic central action with a predominant effect on the central nervous system. The release of choline from the active substance occurs in the brain; choline is involved in the biosynthesis of acetylcholine (one of the main mediators of nervous excitation). Alfoscerate biotransformed to glycerol phosphate, which is a precursor of phospholipids.

Acetylcholine improves the transmission of nerve impulses, and glycerophosphate is involved in the synthesis of phosphatidylcholine (membrane phospholipid), as a result, the elasticity of membranes and the function of receptors are improved.

Gliatilin increases cerebral blood flow, enhances metabolic processes and activates the structures of the reticular formation of the brain, as well as restores consciousness during traumatic brain damage.

It has a preventive and corrective effect on the factors of involutional psychoorganic syndrome, such as changes in the phospholipid composition of neuronal membranes and a decrease in cholinergic activity.

- The acute period of traumatic brain injury, mainly with stem lesions (including in case of impairment of consciousness, coma);

- degenerative and involutional psychoorganic syndromes and consequences of cerebrovascular insufficiency, such as primary and secondary disorders of mnestic functions, characterized by impaired memory, confusion, disorientation, reduced motivation, initiative and ability to concentrate;

- hypersensitivity to the drug.

Capsules are ingested before meals; the solution is injected into the / m or / drip.

With the on / in the introduction of the contents of 1 ampoule (4 ml) diluted in 50 ml of saline; infusion rate - 60-80 drops / min. The duration of treatment is usually 10 days, but if necessary, treatment can be continued until positive dynamics and the possibility of switching to capsules can occur.

In chronic cerebrovascular insufficiency, changes in the emotional and behavioral sphere, and multi-infarction dementia, the drug is administered orally 400 mg (1 capsule) 3 times / day.

The duration of therapy is 3-6 months.

Possible: nausea (as a result of dopaminergic activation), allergic reactions.

As a rule, the drug is well tolerated even with prolonged use.

If nausea occurs during the use of Gliatilin, its dose should be reduced.

Gliatilin does not affect the patient's ability to engage in potentially hazardous activities.

Symptoms: nausea. When this symptom occurs, it is recommended to reduce the dose of the drug.