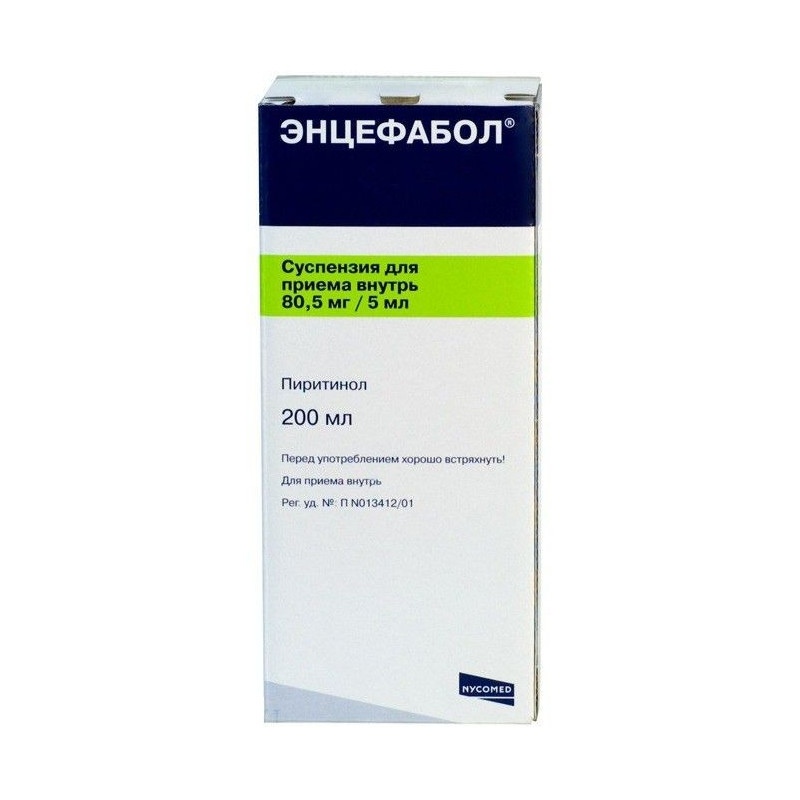 In a bottle of dark glass 200 ml suspension. In the package 1 bottle.

Encephabol is a nootropic drug. It increases pathologically reduced metabolism in the brain tissues, which is caused by an increase in the capture and utilization of glucose, increases the metabolism of nucleic acids and the release of acetylcholine in the synapses of nerve cells, and improves cholinergic transmission in the nervous tissue.
Pyritinol contributes to the stabilization of the structure of the cell membranes of neurons and their function by inhibiting lysosomal enzymes, thereby preventing the formation of free radicals.
Encephabol improves the rheological properties of blood, increases the plasticity of red blood cells by increasing the ATP content in their membrane, which leads to a decrease in blood viscosity and improved blood flow.
It improves blood circulation in ischemic brain areas, increases their oxygenation, and intensifies glucose metabolism in primary ischemic brain areas. As a result, memory indices are improved and impaired metabolic processes in the nervous tissue are restored, which contributes to the full functioning of its cells.

If necessary, the use of Encephabol during pregnancy or during lactation (breastfeeding) should relate the intended benefits to the mother and the potential risk to the fetus or infant.
Pyritinol penetrates the placental barrier, in small quantities excreted in breast milk.
In experimental studies, the presence of the teratogenic or embryotoxic action of pyritinol has not been established.

The dosage regimen is set individually, depending on the severity of the condition and the effectiveness of therapy.
Take the drug should be during or after a meal. In case of sleep disorders, the last daily dose should not be taken in the evening or at night. It should be borne in mind that in 1 teaspoon - 5 ml of suspension. The duration of treatment depends on the clinical picture of the disease.
For adults, the average dose is 600 mg / day (10 ml of suspension 3 times / day).
Newborn encephabol is prescribed from 3 days after birth to 20 mg (1 ml of suspension) per day for a month, the drug should be given in the morning.
In children aged 2 months and older, the dose is increased by 20 mg (1 ml) every week until the daily dose reaches 100 mg (5 ml of suspension).
Children aged 1 to 7 years should be administered in a daily dose of 50 mg to 300 mg, depending on the indication (2.5-5 ml of suspension, 1-3 times / day.).
For children older than 7 years, the daily dose is from 50 mg to 600 mg ((2.5-10 ml of suspension 1-3 times / day).
In acute conditions and the appointment of the drug in high doses, a noticeable therapeutic effect is achieved after a few hours or days.
In chronic diseases (including the effects of traumatic brain injury or dementia), a significant therapeutic success is achieved after 2-4 weeks of treatment. The optimal and lasting effect usually occurs after 6-12 weeks. The duration of treatment for chronic diseases should be at least 8 weeks.
In newborns with a high risk of perinatal pathology, the average duration of treatment is 6 months, while after 3 months, you should check for indications for further treatment.

At use of drug according to indications in the recommended doses development of side effects is improbable.
Gastrointestinal: nausea, vomiting, diarrhea are possible; rarely - loss of appetite, change in taste sensitivity, abnormal liver function (increased transaminase levels, cholestasis).
From the side of the central nervous system: possible sleep disorders; rarely, irritability, headache, dizziness, fatigue.
Other: possible allergic reactions of varying severity, usually manifested in the form of rashes on the skin or mucous membranes, itching, fever.

In patients with rheumatoid arthritis and other chronic diseases of the joints, there is a hypersensitivity to compounds that include the SH group, including to pyritinol. These patients have an increased risk of hypersensitivity reactions, immunopathological reactions, as well as disorders of taste sensitivity and liver function.When treating this category of patients, systematic monitoring of general blood, urine, liver function, and immunological parameters is necessary.
Hypersensitivity reactions to the drug may occur in patients with hypersensitivity to D-penicillamine, since the latter has a similarity to pyritinol in chemical structure (thiol groups).
When using Encephabol for indications, as a rule, there are no restrictions for those activities that require increased attention, quick psychomotor reactions. However, given the likelihood of individual differences in the response of individual patients to the drug, at the beginning of treatment and with increasing doses, the possibility of impairment of the speed of psychomotor reactions should be considered.

With the simultaneous use of Encephabol can potentiate the side effects of penicillamine, gold preparations and Sulfasalazine. Clinically significant interaction of encephabol with other drugs has not been established.

The drug should be stored at a temperature not higher than 25 ° C.