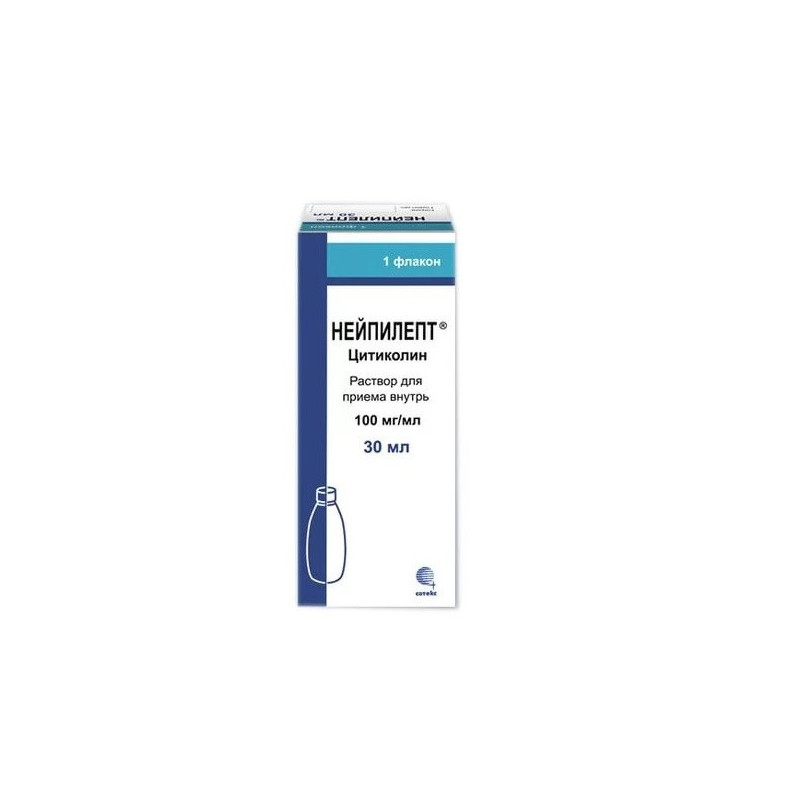 Nootropic drug. Citicoline is a natural endogenous compound that is an intermediate metabolite in the synthesis of phosphatidylcholine - one of the main structural components of the cell membrane.

Citicoline has a wide spectrum of action: it helps to restore damaged cell membranes, inhibits the action of phospholipases, prevents excessive formation of free radicals, and also prevents cell death by acting on the mechanisms of apoptosis. In the acute period of a stroke, citicoline reduces the amount of damage to brain tissue, improves cholinergic transmission. In traumatic brain injury, it reduces the duration of post-traumatic coma and the severity of neurological symptoms, in addition, reduces the duration of the recovery period.

In chronic cerebral hypoxia, citicoline is effective in the treatment of cognitive disorders, such as memory impairment, lack of initiative, difficulties encountered in performing daily activities and self-care. Increases the level of attention and consciousness, and also reduces the manifestation of amnesia.

Citicoline is effective in treating sensory and motor neurological disorders of degenerative and vascular etiology.

Citicoline is well absorbed when taken orally. Absorption after oral administration is almost complete, bioavailability is almost the same as after intravenous administration. After taking the drug, the concentration of choline in the blood plasma increases significantly.

Citicoline is largely distributed in brain structures, with the rapid introduction of the choline fraction into structural phospholipids and cytidine fractions - into cytidine nucleotides and nucleic acids. Reaching the brain, citicoline is embedded in the cellular, cytoplasmic and mitochondrial membranes, taking part in the construction of the phospholipid fraction.

Citicoline is metabolized in the intestine and liver to form choline and cytidine.

Only 15% of the administered dose of citicoline is excreted from the human body: less than 3% - by the kidneys and about 12% - with exhaled CO2. In the excretion of the drug with urine, two phases are distinguished: the first phase, about 36 hours, in which the elimination rate decreases rapidly, and the second phase, in which the elimination rate decreases much more slowly. The same is observed in exhaled CO2, the rate of excretion rapidly decreases after approximately 15 hours, and later on it decreases much more slowly.

- acute period of ischemic stroke (as part of complex therapy);

- traumatic brain injury, acute (as part of complex therapy) and the recovery period;

- cognitive and behavioral disorders in degenerative and vascular diseases of the brain.

The drug is taken orally, during meals or between meals.

Acute ischemic stroke and traumatic brain injury: prescribe 1000 mg (10 ml) every 12 hours. The duration of treatment is at least 6 weeks.

Recovery period for ischemic and hemorrhagic strokes, recovery period of traumatic brain injury, cognitive and behavioral disorders in degenerative and vascular diseases of the brain: appoint 500-2000 mg (5-20 ml) / day. The dose and duration of treatment is determined depending on the severity of the symptoms of the disease.

When prescribing citicoline elderly patients dose adjustment is not required.

- Hypersensitivity to any of the components of the drug;

- severe vagotonia (high tone of the parasympathetic part of the autonomic nervous system);

- age up to 18 years (due to the lack of sufficient clinical data).

There are insufficient data on the use of citicoline in pregnant women. During pregnancy, citicoline is prescribed only in cases where the expected benefit to the mother outweighs the potential risk to the fetus.

When using citicoline during lactation, women should decide on the termination of breastfeeding, since data on the excretion of citicoline into breast milk are not available.

The drug is contraindicated at the age of 18 years (due to the lack of sufficient clinical data).

Use in elderly patients

When prescribing citicoline elderly patients dose adjustment is not required.

In the cold, a small amount of crystals may form due to the temporary partial crystallization of the preservative. Upon further storage under recommended conditions, the crystals dissolve within a few months. The presence of crystals does not affect the quality of the drug.

During the use of the drug should be careful when driving and occupying other potentially dangerous activities that require high concentration of attention and speed of psychomotor reactions.

Given the low toxicity of the drug, overdose cases are not described, even in the case of exceeding therapeutic doses.

Citicoline enhances the effects of levodopa.

It should not be used simultaneously with drugs containing meklofenoksat.

The drug should be stored out of the reach of children at a temperature not exceeding 25 ° C; do not freeze. Do not use beyond the expiration date printed on the package.