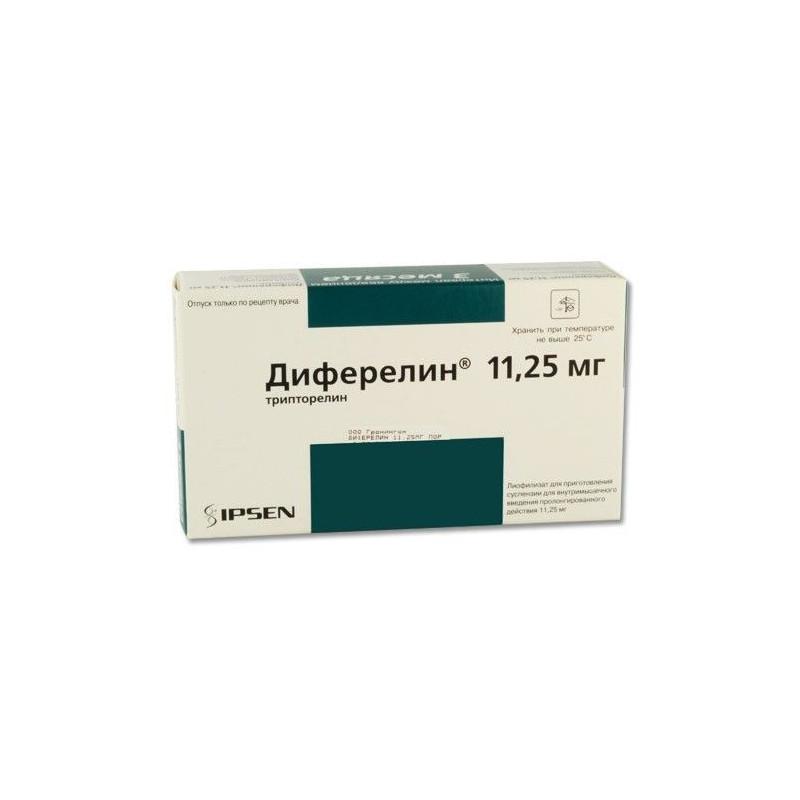 Diphereline - an antitumor agent, a synthetic analogue of the GRF. Possesses antigonadotropic action. The mechanism of action is based on the direct impact on the gonad by reducing the sensitivity of peripheral receptors to the effects of GRF. After a short initial period of stimulation of the gonadotropic function of the pituitary (short-term increase in the concentration of gonadotropins), triptorelin suppresses the secretion of LH, FSH and, accordingly, the function of the testicles and ovaries. As a result, inhibition of the secretion of estrogen by the ovaries to the state of menopause occurs, as well as a decrease in the secretion of testosterone, the concentration of which can reach the values ​​observed after surgical castration.
The maximum effect develops for 3 weeks (the incretion of gonadotropins, LH and FSH completely stops, the production of estrogen by the ovaries decreases to the level of menopause or postkastratsionnogo). Menstruation usually occurs no earlier than 3 months after the final injection.
The depot form gradually releases triptorelin from the surface of the microcapsules and maintains the therapeutic concentration in the blood (200-500 ng / ml).

Prostate cancer. Diferelin administered at a dose of 11.25 mg every 3 months.

Endometriosis. Diphereline is administered in a dose of 11.25 mg every 3 months. Treatment must begin in the first five days of the menstrual cycle. The duration of treatment depends on the severity of endometriosis and the observed clinical picture (functional and anatomical changes) during therapy. As a rule, treatment is carried out for 3-6 months. It is not recommended to repeat the course of treatment with triptorelin or gonadotropin-releasing hormone.

At the beginning of treatment. Dysuric disorders (difficulty urinating, incomplete emptying of the bladder, pain), bone pains associated with metastases and compression of spinal cord metastases, which can be exacerbated by a temporary increase in plasma testosterone levels at the beginning of treatment. These symptoms disappear in 1-2 weeks.Also during this period, a temporary increase in liver enzyme activity in the blood plasma may be observed.

During treatment: hot flushes, decreased libido, gynecomastia, impotence, which is associated with a decrease in plasma testosterone levels.

At the beginning of treatment. Symptoms associated with endometriosis (pelvic pain, dysmenorrhea), which may be exacerbated by the initial transient increase in plasma concentration of estradiol and disappear after 1–2 weeks.

One month after the first injection, metrorrhagia may occur.

In men and women:

Treatment of endometriosis. Before starting treatment it is necessary to exclude pregnancy.

During the first month of therapy, non-hormonal contraceptives should be used.

Intramuscular injection of the drug leads to persistent hypogonadotropic amenorrhea.

Treatment should not be recommended for a period of more than 6 months. It is not recommended to repeat the course of therapy with triptorelin or another gonadotropin-releasing hormone analogue.

The occurrence of metrorrhagia during treatment, not counting the first month, is not the norm, and therefore it is necessary to determine the concentration of plasma estradiol. By reducing the estradiol concentration to less than 50 pg / ml, other organiclesions.

In the treatment of prostate cancer. The most pronounced beneficial effect is observed in patients in the absence of another previously conducted hormone therapy.

At the beginning of treatment, the appearance and aggravation of clinical symptoms (in particular, bone pain, dysuric disorders), which are transient, may be observed.

This implies careful observation of these patients during the first few weeks of therapy (plasma testosterone levels should not exceed 1 ng / ml).

Treatment with Diphereline must be carried out in strict accordance with the instructions for use. Any change in the volume of the suspension injected in the / m should be recorded.