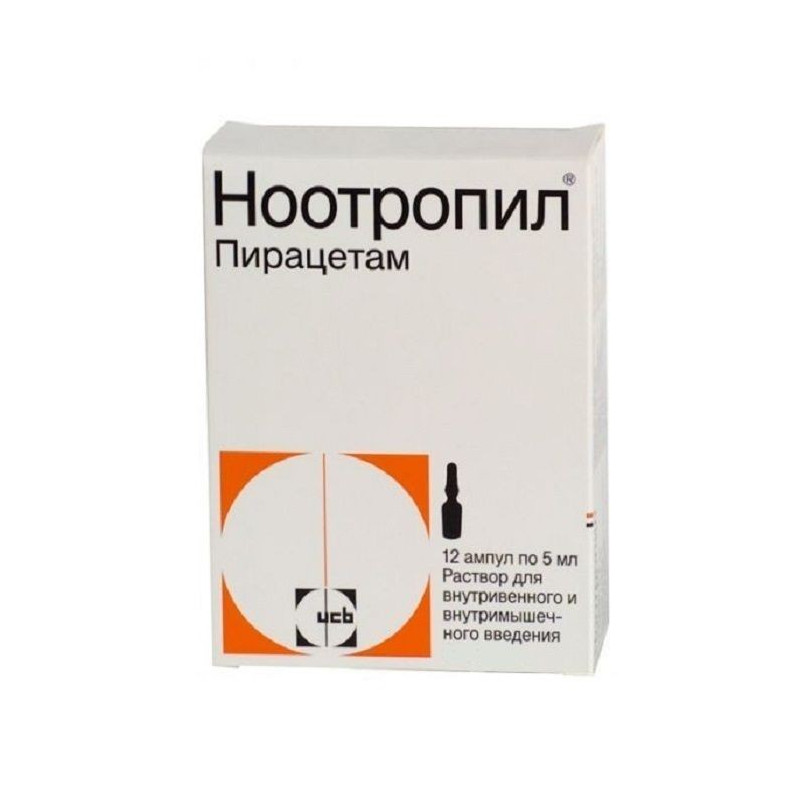 - symptomatic treatment of psychoorganic syndrome (includingin elderly patients with decreased memory, dizziness, decreased ability to concentrate, mood changes, behavior disorder, gait disturbance, as well as in patients with Alzheimer's disease and senile dementia of the Alzheimer's type);
- treatment of the consequences of ischemic stroke, such as speech disorders, disturbances of the emotional sphere, to increase motor and mental activity;
- for the treatment of withdrawal syndrome and psychoorganic syndrome in chronic alcoholism;
- coma (and during the recovery period), incl. after injuries and intoxications of the brain;
- for the treatment of dizziness and related balance disorders (with the exception of cases of dizziness of vasomotor and psychogenic origin);
- as part of complex therapy of low learning in children with psychoorganic syndrome;
- treatment of cortical myoclonia (both as monotherapy and as part of combination therapy);
- sickle cell anemia (as part of combination therapy).

From the side of the central nervous system: hyperkinesia (1.72%), nervousness (1.13%), drowsiness (0.96%), depression (0.83%), asthenia (0.23%). These side effects most often occur in elderly patients who received the drug at a dose of more than 2.4 g / day. In some cases - dizziness, headache, ataxia, imbalance, exacerbation of the course of epilepsy, insomnia, confusion, agitation, anxiety, hallucinations, increased sexuality.
Metabolism: weight gain (1.29%).
Gastrointestinal: in some cases - nausea, vomiting, diarrhea, abdominal pain.
Dermatologic: dermatitis, itching, rash, swelling.

- hemorrhagic stroke;
- pronounced impaired renal function (CC less than 20 ml / min);
- children's age up to 1 year;
- Hypersensitivity to piracetam, a derivative of pyrrolidone and other components of the drug.

Studies on the use of the drug Nootropil during pregnancy in humans have not been conducted. Piracetam penetrates the placental barrier and into breast milk. The concentration of the drug in newborns reaches 70-90% of its concentration in the blood of the mother.
Except in special circumstances, Nootropil should not be administered during pregnancy. Should refrain from breastfeeding in the appointment of the drug during lactation.
Experimental studies animals showed no damaging effects on the embryo and its development, incl. in the postnatal period, as well as changes during pregnancy and childbirth.

Caution should be exercised in the appointment of the drug to patients with impaired hemostasis, during major surgical operations, or patients with symptoms of severe bleeding.
When treating patients with cortical myoclonia, it is necessary to avoid abrupt withdrawal of therapy, since this may cause the resumption of seizures.
With long-term therapy in elderly patients, regular monitoring of renal function indicators is recommended, and, if necessary, dose adjustment is carried out depending on the results of the creatinine clearance study.
Nootropil penetrates through the filtering membranes of hemodialysis machines.
Influence on ability to drive motor transport and control mechanisms
Taking into account possible undesirable effects, the patient should be careful when performing work with mechanisms and driving a car.

Symptoms: when taking 75 g of piracetam in the dosage form, the oral solution is marked by dyspeptic phenomena, such as diarrhea with blood and abdominal pain, which are most likely associated with a high content of sorbitol in the composition of this dosage form. No other special symptoms of Nootropil overdose have been noted.
Treatment: immediately after taking the drug inside in a high dose, you should flush the stomach or induce artificial vomiting. Spend symptomatic patience. Hemodialysis is possible, the effectiveness of which is 50% -60%. There is no specific antidote.

When combined with the use of Nootropil with an extract of the thyroid gland containing triiodothyronine and tetraiodothyronine, the patient may have irritability, disorientation, sleep disorders.
Nootropyl interactions with clonazepam, phenytoin, phenobarbital, valproate sodium were noted.
High doses (9.6 g / day) of piracetam increased the effectiveness of acenocoumarol in patients with venous thrombosis (there was a greater decrease in the level of platelet aggregation, fibrinogen levels, von Willebrand factors, blood and plasma viscosity,than when prescribing only acenocoumarol).
The possibility of changing the pharmacodynamics of piracetam under the influence of other drugs is low, because 90% of the active substance is excreted unchanged in the urine.
In vitro at a concentration of 142, 426 and 1422 µg / ml, piracetam does not inhibit the isoenzymes of CYP1A2, 2B6, 2C8, 2C9, 2C19, 2D6, 2E1 and 4A9 / 11 of the cytochrome P system450. At a concentration of 1422 µg / ml, slight inhibition of CYP2A6 (21%) and 3A4 / 5 (11%) was observed. However, the Ki level of these two isoenzymes is sufficient when exceeding 1422 μg / ml. Therefore, metabolic interaction with other drugs is unlikely.
Reception of piracetam in a dose of 20 mg / day did not change the peak and the curve of the concentration level of antiepileptic drugs in serum (carbamazepine, phenytoin, phenobarbital, valproate) in epilepsy patients receiving a constant dosage.
Co-administration with ethanol and ethanol-containing drugs did not affect the level of serum piracetam concentration and the concentration of ethanol did not change while taking 1.6 g of Nootropil.

The drug should be stored in a dry place at temperatures not above 25 ° C.